Portland crow poisoning: When it is legal to kill crows and how do we build empathy? 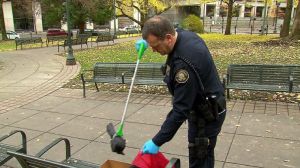 Officer cleaning up one of the many dead crows found in Portland’s Waterfront Park. Photo c/o KOIN 6 News

Normally when I talk about a murder of crows I’m using it as a noun to describe a large group, but in this case I’m talking about the likely deliberate killing of at least 30 birds in downtown Portland, OR.  The Wednesday before thanksgiving, people started to notice dead and seizing crows in the sidewalks and parks and, quickly, the bodies started to pile up at an alarming rate.  Several specimens were sent to a lab for autopsies and, while more definitive answers are yet to come, all signs point to poisoned corn.   Since corn isn’t generally found in urban areas unless put there by people, the Portland Audubon Society fears that these crows may have been deliberately baited and killed.

This has prompted both warranted outrage and…confusion. Why is Fish and Wildlife treating this like a crime, but hunting crows is ok? Crows, like basically all non-invasive birds, are federally protected under both the Migratory Bird Treaty Act and various state laws which means you cannot “take (gov speak for kill, intentionally or otherwise), possess, import, export, transport, sell, purchase, barter, or offer for sale…the bird, or the parts, nests, or eggs of such a bird except under the terms of a valid permit issued pursuant to Federal regulations” (MBTA, 16 U.S.C. 703–712).  It’s that last bit that’s key here.  It means that, just like other game birds, you can shoot crows with a hunting license, though you need a different “validation” than you need for waterfowl or upland game birds and it varies from state to state. Now here’s the rub that some people will say if they get caught killing crows without a license. In many states, including Oregon, you can kill crows without a hunting license and outside of the hunting season if they are “found committing or about to commit depredations upon ornamental or shade trees, agricultural crops, livestock, wildlife, or when concentrated in such numbers and manner as to constitute a health hazard or other nuisance” (ODFW 2013 Bird Regulations).  BUT and this is a big one, you must report these “takes” and there’s all kinds of federal laws that limit how you can kill the animals in these cases. The person who did this both did not report it and used illegal lethal means (poison is basically never ok because it’s too hard to limit it to your target species) hence the pending investigation. Whether or not that investigation actually happens is another matter. You can share your voice and enthusiasm for more legal action here. 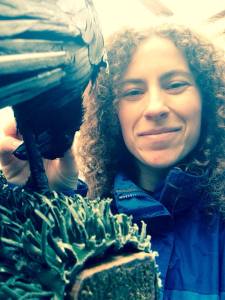 My friend, Simone, and one of her crows, Jekyll. Through both educational outreach and storytelling on social media, people like Simone are reshaping our attitudes towards crows and other corvids.

Hopefully the person(s) responsible for this are found and made accountable for their actions because they broke the law plain and simple.  Though, honestly, I don’t think our best chances of precluding another incident like this are through punishing one or two individuals.  Rather, I think we should continue striving for a more compassionate culture through both science and story telling.   These are two of our greatest tools whenever we’re trying to change hearts and minds (forgive the cliche).  Information on how to non-lethally get rid of crows, and what isn’t effective (like randomly killing 30 birds!), gives us tools to have informed discussions on how to manage crows without useless killings. Data on how smart they are, what their family groups are like, their emotional intelligence etc., challenge the thinking that they’re mindless automatons and makes it harder to treat them as such.  Stories from crow watchers and lovers, set the cultural tone that these are animals we value and make the lives of individual crows more meaningful through personal connections.  These are the tools that will ultimately help us reshape the way people think of, and treat crows.

49 responses to “Portland crow poisoning: When it is legal to kill crows and how do we build empathy?”