Corvid of the month: The large-billed crow

If there’s one corvid that’s most notorious for getting into trouble, it’s probably the large-billed crow (sp: Corvus macrorhynchos* ).  A dubious reputation perhaps, but it’s one that’s been well earned through this corvid’s knack for exploiting humans and the opportunities we create.

Physical description: While large-billed crows aren’t much bigger than an American crow, their square head and heavy bill gives them a more raven-like appearance.  To me, they look like what I might expect if a common raven tangoed with Rick Moranis’s contraption from Honey I Shrunk the Kids.

Range: They are found throughout the northeastern Asian seaboard to Afghanistan and eastern Iran in the west, through South and Southeast Asia, to the Lesser Sundas and Cambodia in the southeast.  Although in India the eastern jungle crow and large-billed crow behave has two distinct species, in northern parts of Asia their distinction is less clear and colloquially the two are often analogous.

Conservation status: Given their large range, it may come as no surprise that their populations are abundant and are considered a species of least concern by the IUCN.  In fact, since the 1980’s the number of jungle crows in Tokyo has quadrupled1.

So what accounts for their bad reputation you ask?  Where to begin…how about vandalizing cemeteries1.  In Japan, food is left at the burial sites of loved ones as an offering.  Although in some cultures these offerings are meant to be eaten by animals, that is not the case here, and the crows’ stealing of food interrupts the intention of the ritual.  Historically, this probably wasn’t a conflict since jungle crow populations were much smaller than they are now.

As if that wasn’t enough to get people fired up, jungle crows also have a bad habit of, well, firing things up.  People were stumped how field fires near the Fushimi-Inari shrine in Kyoto were starting until someone thought to watch the crows.  There are 10,000 candle holders that line the walkways of the shrine and on busy days they may contain thousands of individual burning candles.  With some diligent watching, researchers discovered that crows were eating the melted candle wax (which is often made with tallow) and in some cases taking the burning candles out of the holders and flying off with them.  Although they never witnessed it, researchers suggested that crows’ attempts to cache burning candles may have been the cause of the mysterious fires.2 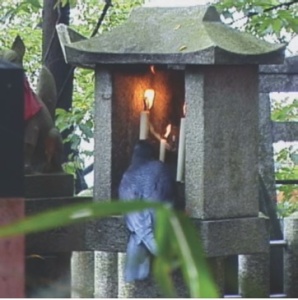 The crows appeared to show no fear of the flames according to the paper’s author. Photo: H. Higuchi

To top it all off, large-billed crows seem to be just as good at turning out the lights as there are at lighting them up! Unlike American crows, which predominately use sticks to build their nests, large-billed crows have developed a fascinating (and immensely frustrating for the Japanese government) habit of using clothes hangers to construct nests.  Mixing wire hangers with power lines is a recipe for disaster and in the summer time large-billed crows are responsible for massive blackouts.  The Tokyo government spends millions of yen, and employs full time crews, to search for and destroy hanger nests in an effort to prevent such black-outs.1 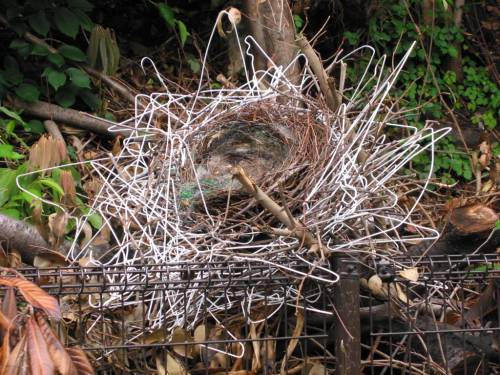 It’s not all bad press for these resourceful crows, however.  One of the more spectacular things they are known for is using cars to crack open otherwise inaccessible nuts.  Not only that, but they also appear to be sensitive to crosswalk signals and know when it’s safe to collect the exposed nuts and when it’s not.3So while large-billed crows make their fair share of trouble stealing food, candles and hangers, there are still plenty of people who adore these animals for their cleverness and ingenuity.  For those that don’t, well, some aren’t shy to take control measures into their own hands.  Or should I say mouths… 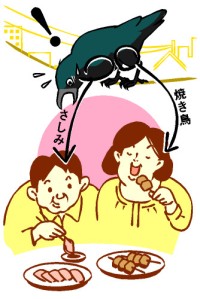 14 responses to “Corvid of the month: The large-billed crow”