Why the crow is black and other mythology

Since humans began telling stories and writing them down, they’ve told stories about crows and other corvids.  This should come as no surprise considering corvids are found in nearly every corner of the world and are as connected to us now as they were centennials ago.  Whether they are sharing (or thieving) the food we grow, consuming the soft tissues of our dead, or delighting us with their company, corvids have infiltrated the most intimate parts of our lives. They walk the earth cloaked in black, and yet persist with the light of life even we perish through disease or famine.  It is this juxtaposition that I think made our human ancestors look upon those glossy feather and conclude they must have some greater tie to creation than their other avian kin.  Be it India, Rome, the Middle East or North America, they’ve been written into the oldest stories explaining how the facts of the world came to fruition.  With that in mind, let’s break from answering questions with the rigors of science this week and embrace the explanations offered by our ancestors.

Why the crow is black (According the the Greeks/Romans)

Apollo, the son of the most powerful greek God Zeus, had an important, albeit tumultuous relationship with crows.  The greek word for crow, corone, comes from the name of Apollo’s mistress, Coronis.  According to the version of this story told by Appolodorus, although Coronis and Apollo had been lovers, she left him to marry a mortal, Ischys.  The crow, then white, brought news of the marriage to Apollo who became so incensed he burned the bird’s feathers and then burned Coronis to death.  In other versions Coronis is herself turned into the black crow and it’s possible the Greeks saw a mated pair of crows as a representation of the forbidden love between Coronis and Ischys.  This may be one of the earliest stories of a woman marrying below her class for love. 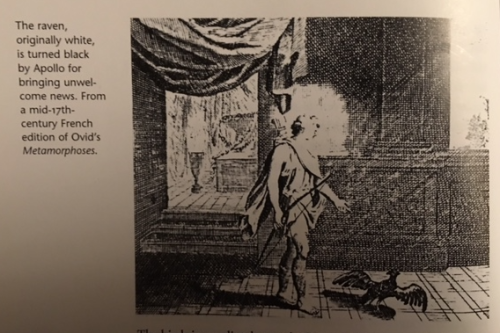 Why the crow is black (According to Muslims)

Muhammad, born sometime around 570 CE, is considered to be the founder of Islam and the last profit sent to earth by God, according to the Islamic faith.  A popular legend depicts a time Muhammed was hiding from his enemies in a cave.  A crow, then white, spotted him and cried “Ghar, Ghar!” (cave, cave!) to his seekers.  They did not comprehend the crow’s cries, however, and Muhammad escaped.  He turned the crow black for the betrayal and cursed him to only utter one phrase for the rest of time;  “Ghar, Ghar!”

Why the crow is hoarse (According to Greek/Romans)

Apollo sent a raven to gather water for a feast but the raven was distracted by an unripened fig tree.  Determined to obtain the figs, the raven waited until the tree ripened, ate his fill, and then captured a watersnake to bring back to Apollo.  The watersnake, the raven explained, was the reason he was late and unable to collect the requested water, but Apollo saw through the lie.  As punishment, Apollo declared the raven could never again drink from the stream until the figs ripened.  Since the raven must now wait, his voice is hoarse from thirst.

Why owls and crows fight  (According to Hindus)

According to the great animal epic, the Panchatantra, the birds had come together to elect a king and choose his earthly appearance.  They had elected the owl and were beginning to organize his lavish coronation, when the crow arrived.  The crow laughed at their decision, protesting that the owl was too ugly, his features without tenderness, and his nature without pity.  Furthermore, Garuda, the eagle mounted Vishnu was already their king and to take another was a sin that could result in severe punishment by the Gods.  The others, scared by the crow’s warning, left in agreement.  Being nocturnal, the owl had slept through all this but now awoke to find his coronation canceled due to the crow’s persuasive words.  They have fought ever since.

Why we die (According to Haida Natives)

Ravens have a significant role in the creations legends of many different Native American tribes.  According to the Haida people of what’s now the Queen Charlotte Islands, Greater Raven was the creator that first called earth into being on the endless sea.  He then made humans out of both rock and leaf.  The people of rock were (as I can well imagine) more difficult to shape and were never finished.  The people of leaf, on the other hand, were quickly completed and ready to roam the land.  The raven instructed them that, like the leaf, they must eventually fall and rot back into the earth and thus death entered the world.

Why the sky is full of light (According to Tsimshian Natives)

Greater Raven, as mentioned above, eventually gave dominion of the world to his sister’s son, Lesser Raven, who it was said was as robust as stone and would live forever.  Unlike Greater Raven, Lesser Raven was both a trickster and had a voracious appetite.  To satisfy his hunger, Lesser Raven filled the earth with food, but feared he would be unable to find it, as at that time the earth was still dark.  Seeking a solution, Raven flew through a hole in the sky where he found another world much like our own.  When he saw the daughter of the Chief of Heaven collecting water he transformed into a needle and floated into her vessel.  When she drank the water and the needle, Lesser Raven impregnated her and was later reborn as her son.  The infant charmed the Chief and his wife and was granted permission to play with the box containing the light of day.  Suddenly, Raven took his original form and flew back to earth through the hole in the sky, taking the box with him.  Later, he broke the box out of anger and filled the sky with the sun, moon and stars.

Please visit Whose Land to learn more about the ancestral lands of the Haida and Tsimshian people. It’s our responsibility as occupiers to learn about the people who existed here before us and where they live today.

Why we bury our dead (According to Judaism)

According to the Yalkut Shimoni, an aggadic compilation of the Hebrew bible written in the 13th century, after Adam and Eve’s son Abel died, they did not know what to do with the body.  Seeing their distress, a raven killed one of his companions to show the grieving couple how to dig a hole and bury the body. To thank the raven for his kindness, God feeds baby ravens until their feathers turn black after which their parents take over.

Thus, be it the color of ravens or the intimate mysteries of human death, crows have offered a canvas on which early peoples the world over painted their explanations of life.   My thanks to Borgia Sax and his terrific book, Crow, which was the factual source and inspiration for this post.

10 responses to “Why the crow is black and other mythology”