With a peanut visible in my gloved hand, we square off.  The crow eyes me from its snow covered perch, weary of such gifts offered by strangers.  Above us a raven castes a disinterested look, croaks, and flies away.  I toss the nut into an empty parking space and the crow descends to quickly collect its prize.  The space between us must be widened before it will comfortably eat however, so I decide to leave the crow to its snack and return to my car. 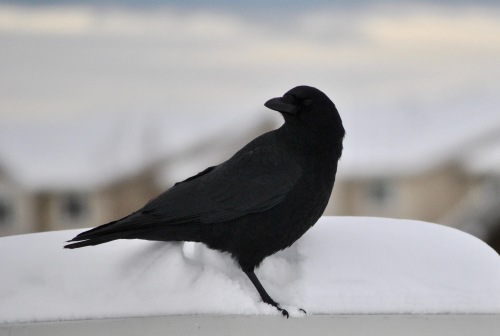 Scrunching my feet in my shoes, I’m relieved for the excuse to retreat.  It’s about 10˚F outside and despite the wool socks and insulated boots between my skin and the snow I can tell that my feet are numb from the cold.  Even stashed in my pocket, my gloved hands are having trouble articulating to their full range.  How is it that my extremities lose function even with so much coddling and yet the crows can continue using their bare toes to steady and manipulate food in such cold weather?

To be clear, birds are endothermic, or warm blooded, just like mammals.  In fact, on average, birds run a little hotter than mammals.  And their feet, like ours, requires warm blood both to function and to prevent the tissues from outright freezing and causing cell death.  Yet despite these needs birds can comfortably walk, stand, or even sleep on ice. 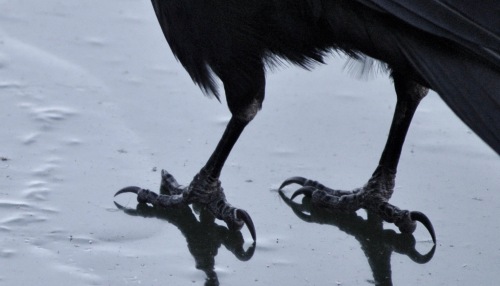 To do so, they can take advantage of two important adaptations.   The first is that the size of the arteries carrying blood into the legs and feet is exceedingly small.  Given this high surface to volume ratio, the blood has already lost most of its heat by the time it reaches the feat, and can’t lose much more to the outside world.  The second is that they employ what’s called a counter current heat exchange system.  Essentially, warm blood traveling away from the core and towards the feet via the arteries comes into close contact with colder blood traveling away from the feet and towards the core via the veins. At this point of contact, heat from arterial blood is transferred to blood traveling in the veins. This heat exchange system allows for the tissues in the feet receive just enough heat to prevent cell death, and can reduce heat loss by up to 90%1.

As an additional strategy, you’ll see them protecting their exposed legs under their body feathers, as if they’re incubating them.  This is the same reason you often see winter birds standing on one leg.  By switching back and forth, birds can minimize overall heat loss by reducing the exposure to only a single leg.

So while I need special clothing to keep my extremities at a similar temperature range to my core, the physiology of most birds is adapted to simply allowing extremities to exist at near ambient temperatures with no tissue damage.  In other words, rather than crows’ feet not getting cold, their feet simply are cold.  That said, frostbite is still a possibility even in birds, particularly for: nonnative species, birds in wire cages, birds with metal legbands, and birds in unseasonably cold conditions.  If frost bite occurs, early treatment at a rehab facility can prevent long term damage2.

Still, the idea that cold-adapted birds can keep their hearts beating away at around 105˚F even while their feet are exposed to freezing temperatures is marvel of adaptation and thermoregulation!

9 responses to “Crow curiosities: Why their feet don’t freeze”