The bird of many names

Camp robber. Whiskeyjack. Canada jay. Gray jay.  I know of no other bird that goes by as many names as the Canada jay.  In fact, it has so many names it’s possible for two people to be swapping stories and not even realize they are discussing the same animal. Why this sweet-faced bird possesses a number of aliases better befitting an agent of espionage is, in part, the result of a rather fascinating bit of birding history replete with controversy, colonialism, chaos, and a contest of national importance. 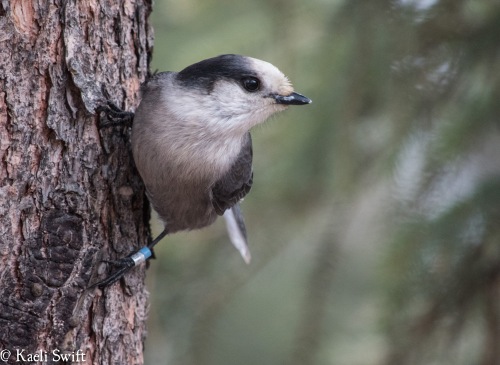 Before we get to the jays though, I want to put in your mind the image of the Ouroboros. If you’ve never seen it before, the Ouroboros is a symbol from Egyptian iconography that depicts a snake or a dragon eating its own tail. The image is meant to imply infinity; the idea that where you end is also where you begin, on and on, forever. Because, as you’ll see, it’s impossible to tell this story without eating our own tails at many different points along the way. So let’s start with the name that’s both the beginning and potentially the end of this story: Canada jay. 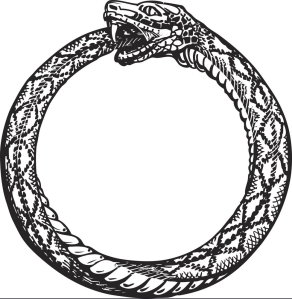 On May 23rd, 2018 the American Ornithological Society announced that Perisoreus canadensis, the bird formerly known as the gray jay, would be officially recognized as the Canada jay.  Although this change felt disruptive to some, for the folks spearheading the campaign, including foremost Canada jay expert Dan Strickland, this was the righting of a historical wrong more than a half-century in the making.

According to Strickland’s research, which he details in a facinating article called “How the Canada Jay Lost its Name and Why it Matters,” one of the earliest scientific references to this bird was in an 1831 zoology book called Fauna boreali-Americana where they name it as a Canada jay. Even James Audubon used the name Canada jay when he described it in the 1840s. From here the story of the jay’s name gets hairier, with lots of different dates, acronyms, and taxonomic nuance, but I want to try and take you through it because it tells you so much about why things ended up as they did.

During the early 1800’s the process of discovering* and naming birds was something of a wild west operation. It wasn’t until 1883 that an official body, the American Ornithologist’s Union, AOU, (now called the American Ornithology Society, AOS), was formed to take leadership and help legitimize the field of ornithology in North America. Part of this goal was to act as the official body for taxonomic and nomenclature decisions. In keeping with this goal, AOS publishes a checklist of North American birds every decade or so. So who is on that list, and what they call it, means a great deal. For the first two publications (1886 and 1895) our bird was called the Canada jay, but then after 1895 all more or less goes to hell.

At the root of this naming disaster was a failure to provide a clear and rigorous English naming system at both the full and subspecies level. Instead, the system (if you could call it that) was that birds with only one species (monotypic species) were given a binomial Latin name and an English common name, but birds with subspecies (polytypic species) like our bird, may or may not be given an English common name or a Latin binomial name. Instead, their subspecies were given Latin trinomial names and English common names. What this meant is that if you saw a Canada-jay like bird, unless you knew which subspecies it was, the best your guide could tell is that it was merely a Perisoreus jay. This also meant that the name “Canada jay” effectively got downgraded to describing a single subspecies: Perisoreus canadensis canadensis. An effort to name yet another Perisoreus subspecies, Perisoreus obscurus griseus, appears to be when the name “gray jay” first comes into play.

I doubt anyone would question why failing to provide common names to full species would cause confusion, but matters were made worse because there was no system in the nomenclature behind the common names for the subspecies. This lead to problems like not being able to identify from the English name alone if you were talking about a species or a subspecies, and having subspecies from different respective species sharing the same root name. For example “clapper rail” could refer to subspecies of either Rallus obsoletus or Rallus longirostris.

In the late 1930s, people grew increasingly frustrated with this system and started to put pressure on AOS to develop a more logical naming scheme. At the forefront of this effort was a recommendation by Alden Miller to adopt a system where full species would be given English common names and binomial Latin names, and subspecies would only be provided a trinomial latin name. For example, Perisoreus canadensis would be given the English common name of Canada jay, and its Alaskan range subspecies would be known only as Perisoreus canadensis fumifrons.

Although this scheme was well supported, during the 1940 vote, it was inexplicably voted down. Instead, in 1947 the committee welcomed a new system where both the full species and the subspecies were given common names but, in an attempt for clarity, required that the subspecies’ common name was both rooted in the full species’ common name and geographically relevant. It’s this decision that officially killed the “Canada jay” because the committee likely felt it would be too geographically awkward to have subspecies names like the “Alaskan Canada jay” or the “Oregon Canada jay” and so instead, they opted for gray jay as the official full-species name.

By 1954, however, this system grew too taxing and the committee essentially adopted Miller’s 1930’s suggestion: only full species get official common names and subspecies are named and identified by their trinomial Latin name. For some reason, though they did not revert back to the original* name of Canada jay as their rules suggested they should, and instead they curiously retained the name gray jay. This may have been the last of it if not for a ~political~ controversy that would rock the nation of Canada a half-century later.

In 2015 the Royal Canadian Geographical Society sought to declare a national bird of Canada, a spot that remained egregiously vacant, by hosting a massive public vote to choose among 40 potential candidates. As the popular vote neared an end, five front runners had emerged: the gray jay, the Canada goose, the common loon, the black-capped chickadee and the snowy owl. Ultimately, the common loon would go on to win the popular vote by a 10% margin. Once voting closed, however, the RCGS convened a panel of experts to debate which bird they thought was most worthy. To the shock and upset of the voters, in 2016 RCGS ultimately chose the gray jay, a bird many voters complained did not have the connotation of national pride that the loon did. In the end, though, none of it-the year and a half long competition, the 50,000 votes, the ensuing controversy-mattered because the actual Canadian government had no interest in naming a national bird.

Still, the public’s perception that the jay was not a strong enough symbol did not sit well with Canadian jay scientists like Strickland and Ryan Norris who knew of the jay’s more patriotic heritage. Determined to understand and ultimately reverse the 1954 ruling, Strickland set out to show AOS that the decision to retain the name “gray jay” was not in keeping with their own rules. And, as you already know, in 2018 he succeeded; the bird formerly known as the gray jay (which was formerly known as the Canada jay) is now officially reknown as the Canada jay. The Ouroboros has finally caught its tail. Well, for many people it has.  I want to enter yet one more heir into this contest, the one that I believe holds the most legitimacy to the throne: the whiskeyjack.

Unlike the name might suggest, whiskeyjack isn’t derived from campfire tales about these gregarious birds robbing campers of their whiskey.  It’s an English name derived from the indigenous Cree (and other Algonquian family languages) name for the bird, Wisakedjak. In Cree culture (and some other First Nations peoples of the subarctic region) Wisakedjak is a sacred figure who is known as a trickster and in some cases for being among the creators of the world.  It’s a befitting name for this clever little corvid and the merits of its legacy are without question.  In fact “whisker-jack” can even be found in the English literature as early as 1740, nearly one hundred years before the name Canada jay would first be used. I’m not alone in my support either, even during the 1947 debate, L.L. Snyder notes that “‘Whiskeyjack’ is used universally in the north (& will continue to be).”

Throughout this article, you may have noticed the occasional * following words like “original” or “discovered” and that’s because those words are only relevant when thinking about natural history in post-colonial terms. But the truth is that most wildlife were already known, already named, already studied by the various peoples that called this continent home before their lands were taken from them, and their traditional knowledge erased in favor of a Western approach. So if our goal is to honor the heritage of this bird, I can think of no name more appropriate than the “whiskeyjack jay.” That is the return to the beginning that this magnificent bird deserves.

7 responses to “The bird of many names”