Dumpster diving is giving crows higher cholesterol—but does it matter?

Whether it’s from actively watching crows, or simply just existing in a city, we’ve all seen it: the overflowing garbage bin with fat-stained wrappers littered at its base, and the crows snapping up each bit of leftover junk like spilled money.  Cheetos, cheeseburgers, fries, nuggets, chips, or pizza, they will devour basically anything fatty and salty with absolute glee.  This behavior is so canonically crow that it’s stapled into our contemporary imagery of these birds.  Take this 12ft statue called “Crow with Fries” by artist Peter Reiquam. 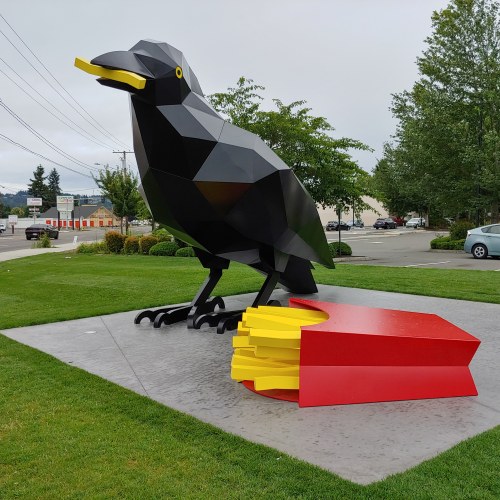 I’d wager that most people don’t think about this behavior beyond simply finding it amusing or annoying, but I suspect that if you describe yourself as crow lover, naturalist, or bird watcher, you’ve been struck with the same thought as me: “This stuff is called junk food for a reason—it’s bad for you.  What’s it doing to these birds?”

Given that anthropogenic foods can account for as much as 65% of an urban crow’s diet, it seems essential to understand what a diet derived from regularly feasting at McDonalds might do to an animal with 0.7% the body mass of a typical human.1  Unfortunately, we could do little more than shrug and speculate as to its effects.  The data for a more informed understanding just didn’t exist.  That is, until today. 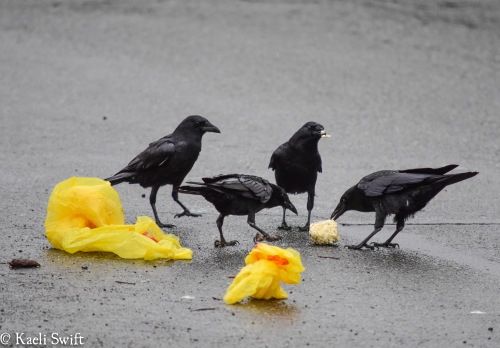 A new study published in The Condor by Dr. Andrea Townsend et al. examines the relationship between urbanization, junk food, and the body conditions of crows.2  To conduct this study, her team blood sampled 140 wild crow nestlings along an urban to rural gradient.  They found that plasma blood cholesterol levels increased in correlation with the amount of impervious surface, which is a typical way we measure urbanization.  This finding suggests that crows in the city have more access to high cholesterol foods and they make haste in gobbling it up.

Correlation is not causation, however, so to confirm this, they ran an additional supplementation study where they provided 10 rural crow parents with 3 McDonalds cheeseburgers 5-6 days a week, and then looked at how their nestling’s blood cholesterol levels compared with unsupplemented nestlings from the same area. They found that eating cheeseburgers most days of the week had a demonstrable effect on the subject’s cholesterol levels.  While this finding may not be raising any eyebrows, the actual logistics of carrying out a study that required buying hundreds of cheeseburgers each week, and sometimes in one order, certainly did.  In one of their more memorable attempts, Hannah Staab called to place an order for 125 pickle-less cheeseburgers, a request to which McD’s staff replied, “Sure, we’ll get right on that.”  When she arrived several hours later to pick them up, however, they hadn’t made any, having been convinced that the call was a prank.  The peculiarities of urban fieldwork never falter.

So far, these findings tell us little more than what most people could have probably intuited, but they were crucial to laying the foundation for the real clogged heart of this study: Whether any of this is actually a bad thing.  In the final piece, they examined the body condition, and 2-3 year survival of the 140 nestlings sampled along the urban to rural gradient.  They found that cholesterol levels had no detectable effect on survival and were actually correlated with higher indices of body condition (meaning mass adjusted for size), a feature that is sometimes tied to higher reproductive success and survival. In other words, there might actually be a scenario where regularly pigging out on McDonalds doesn’t kill you and is maybe kinda helpful?

Needless to say, this caught everyone off guard, including Dr. Townsend, who told me, “I was surprised that we didn’t detect any negative health effects. I was thinking—based on the human literature—that high-cholesterol birds would have lower survival rates, but we didn’t see any effect of cholesterol on survival.”

So what gives? Is the universe really just this unfair?  While we can’t rule out that the answer is simply, “Yes,” the authors speculated that it’s possible a longer study would bear out health consequences that take more than a few years to accrue. There’s also something to be said for the fact that body condition has complex and not always agreed upon relationship with fitness and survival.3 While some studies show pudgy birds have more resources to produce more offspring and keep on ticking, others find inconsistent support. Alternatively, crows may just not live long enough to see their lifestyle catch up to them.  Future long-term studies will be necessary to fully understand whether crows have truly found a loophole in the junk-food problem. For now however, I’m happy to wish my favorite dumpster divers well, though I’ll hold off placing my own orders.

16 responses to “Dumpster diving is giving crows higher cholesterol—but does it matter?”