While my first love will always be crows, I am delighted to have found a new PostDoc position studying a much less familiar and understood bird; the Tinian monarch. Tinian monarchs are a small songbird in the monarch flycatcher family, native to only one island in the entire world, Tinian of the Northern Mariana Islands. Although most Americans (in my experience) have never heard of Tinian, it’s both part of the US and one of the most significant places in global history, having been the location from which the atomic bombs were ultimately assembled and the departure point for the Enola Gay in 1945. Today, Tinian is a US commonwealth though it has been the subject of global imperialism for nearly 6 centuries. Starting in the 1500s, each new era of colonialism brought with it environmental and biological changes that continue to shape the island’s people and ecology today. Of most significance was the conversion of much of the native habitat to sugar cane fields under Japanese rule from 1926-1940, and then in 1944 when Tinian was subject to extensive US-led military campaigns. By the end of WWII, only 5-7% of Tinian’s native forests were left.

Having been so thoroughly devastated, biologist at the time estimated that the world’s population of Tinian monarchs were limited to only around 50 individuals. By 1970 they were formally listed under the Endangered Species Act, though no systematic population surveys were actually conducted before listing. Once such surveys were completed in 1982, the world’s population of Tinian monarchs was astonishingly large relative to those 1940 era estimates at nearly 40,000 individuals. Populations continued to grow and the monarch was formally delisted (i.e. is no longer considered endangered or threatened under federal law) in 2004. Still, single island endemics are, by their very nature, rare and vulnerable to catastrophe. Not to mention there are still many unknowns about this bird’s even basically natural history. Which brings us to my current position. As a University of Washington PostDoc working under quantitative ecologist Dr. Beth Gardner, my current research focuses on the reproductive success of this fascinating little bird. In addition, our team is hoping to fill in many of the remaining questions regarding their natural history such as site fidelity and dispersal patterns. To do this I have the great fortune to be living on Tinian for the better part of 2021 and 2022. I am delighted to be able to contribute to expanding our knowledge and awareness of these critical and objectively adorable little birds. 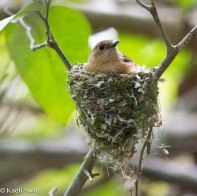 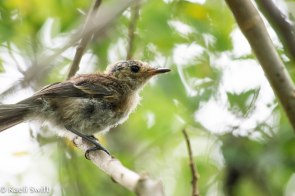