What happens to baby crows at the end of summer?

Watching each year’s new crop of kiddos is one of my favorite parts of the summer field season.  I love observing the awkward, dumpy juveniles making their first forays into the wild.  I get a special kick out of watching them interact with other animals, especially the pigeons that they often find themselves competing for handouts with.  In one instance, I watched as a young crow decided to practice a bit of tail pulling on an unlucky pigeon.  After grabbing it by the tail feathers, the crow started swinging the pigeon around its head; the pigeon remaining aloft with its useless flapping while the crow just went round and round, seemingly very pleased with its animate lasso.  Antics like these are much of what I suspect drives many people’s interests in crows.  They’re just so charismatic!  So it’s no wonder I encounter so many people who take an interest in their resident family of birds.  For those of you that do, you may find yourself wondering what happens to each year’s batch of young fledgies.  Although there’s still much that remains mysterious about the transition from crow kid to crow adult, we know, or at least have begun to understand, some of the options that face these young birds. 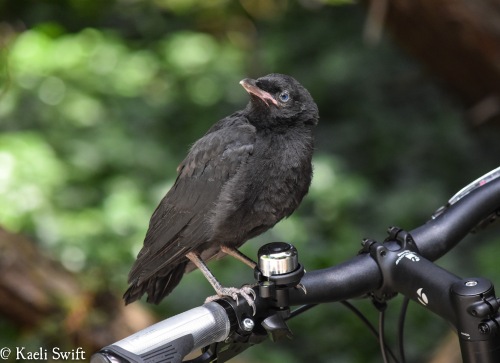 Without being able to fly just yet, this fledgling appears to be vying for an alternate means of transportation!

Let’s get the painful part out of the way first.  Although estimates vary, it’s safe to say many, if not most, of young crows die within their first year.  We know this by putting light (3% of a bird’s body weight) radio transmitters on a reasonable sample size of birds and then following them over the course of the next several years.  Previous work in the PNW showed that about half died.1  This is consistent with observations of banded birds out of the McGowen lab at Cornell.2  So that, unfortunately, takes care of a lot of the young birds that delight us during June and July.  But what of the others?

For the first few months after they leave the nest, young crows stick close to the family unit.  They are fiercely defended by their parents, and as a result of this safety net have the time and energy to engage in the play behaviors like those I watched.  Allowing for this period of relatively safe exploration and play may be part of the reason long lived social animals such as corvids, primates, cetaceans (dolphins and whales) and elephants, are known for being so smart.  Though, I’ll qualify that by saying exactly why that correlation exists is very poorly understood despite what your high school bio teacher may have told you about the function of play. 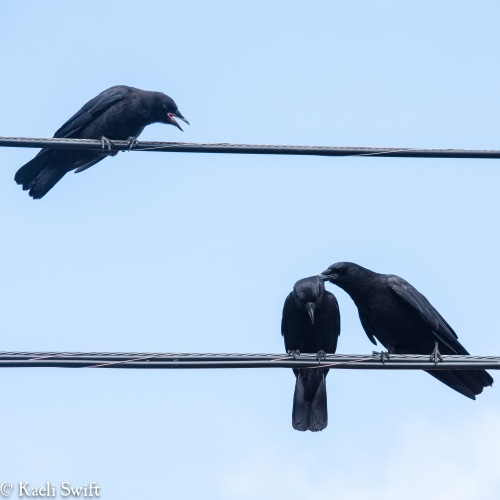 A baby crow begs while mom and dad attempt to enjoy some parental bonding time.

After this security period, young birds will begin to spend more of their days with larger flocks that may or may not include members of their family.  At this time of year I’m often seeing large groups of local juvies hanging out and generally causing mayhem.  Come the fall and winter, however, each individual is faced with a more distinct option:  They can either take off to “float” before finding a mate and establishing a territory of their own, or remain on their home turf and act as a “helper” for next year’s brood.  The latter option is known as cooperative breeding and I’ll save a more full discussion of it for another post.  If they float, they may do so close to home and regularly visit the territory, or far from home returning only occasionally or not at all. Suffice it to say that crows who take this option are making a fascinating “choice” to delay their own reproduction in favor of helping their parents, something that is the subject of much study.   Of the crows tracked as apart of the UW study, about 1/5 remained with parents and there was a very strong sex bias in favor of males for this option.  Of those that disperse they’ll likely settle down within 2-3 years and find a territory similar to the one they were raised in.  So keep your eyes out as the fall progresses, and watch how the dynamic of your resident family plays out. 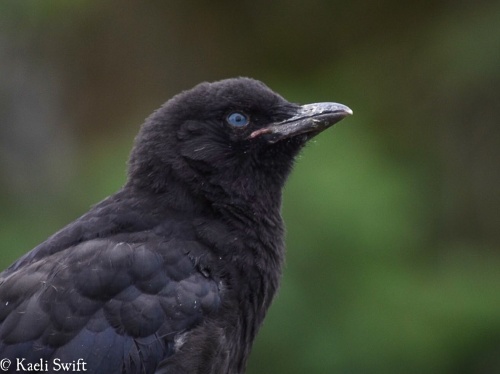