Jays do those sassy peanut moves for good reason

After I lay down my handful of un-shelled peanuts it’s only a matter of minutes before I can hear the “thwap!” as the steller’s jay hits the cable wire that runs above my balcony’s railing.  It balances there for a moment before descending onto the pile I’ve offered it.  Quickly, and with obvious purpose, it springs down the railing and picks up a nut.  Its mohawk feathers bounce as it snaps and cocks its head around in various direction.  After only a few seconds, I hear the sound of rejection; the distinct hollow tap as the nut is returned to the railing.   The jay repeats the same process with two more nuts before abruptly flying off with one that, to my eyes, appeared identical to the first two.

Certainly most manner of corvids engage in some kind of choosy behavior though I don’t think any of them go about it with as much frenetic spunk as jays do.  So the questions arise: Why are they being so picky?  What do they know about the rejected nuts that my eyes can’t see?

According to a new study1, Mexican jays are actually ‘weighing’ nuts during this process.  By using specialized slow motion cameras, researchers showed that those snappy head movements are actually a way for the birds to get a tactile feel for the the nut’s weight and listen to the sound the peanuts makes as it rattles in its shell.  By providing nuts that were visually similar but different in mass, the researchers were able to show that jays could consistently select nuts with the most nutmeat density.  A further test showed that large shells that were altered to contain only one nut were typically selected first, only be be rejected, while single nut shells were accepted.  This suggests that jays either have a sense for how much nut should weigh (and thus reject nuts that contain less than they should) or that the correlation between hollow sounds and nut density lead to the ability to choose denser nuts.

So the next time your visiting jay delights you with its sassy head snaps remember; it may simply be amusing to you but for jays, it’s an impressive product of evolution that helps keep them alive. 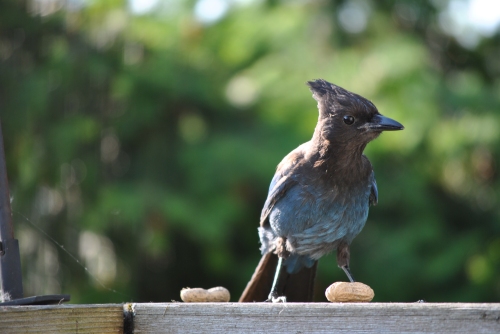