Earlier this week we were fortunate to play host to Science and National Geographic writer, Virginia Morrell.  Her upcoming book, Animal Wise, walks readers through some of the most exciting science in animal behavior and emotions and is available for preorder on Amazon.  It was a wonderful opportunity to meet a renowned science writer but, even better, an excuse to go out trapping and get my first scanning experience with the crows.

Our first trapping effort took place the day after new years and, all in all, was a disaster.  The birds took longer than expected to find our food bonanza and once they did, our net launcher failed to deploy.  Thinking it was a problem of dead batteries, we headed in and ate some lunch while we waited for them to charge.  Hours later, after more deployment failures we discovered it was a faulty trigger and wrapped up the day.  We would have to head back to campus and get the other trigger box, something that would take too much time to do try any more trapping that day.  Once back on campus we discovered, of course, that the second trigger box didn’t have the right plug and would require an adapter.  Although a disappointment to finish the day empty handed, it was a good reminder how many details are present (and can go wrong) at every step of the research process.

Day two promised more success, and indeed we managed to net a bird.  A wonky net deployment, however, missed a great group feeding from our bait site, and we were disappointed to have not caught more.   The scanning demo for Virginia only required a single bird, but it’s hard not to get greedy when you know more data could be collected.  Having caught our bird early enough in the day we thought it was worth trying again and laid more bait out.  After waiting around with no success we packed up and moved our trapping equipment down the road, hoping to net some naive birds.  After our dispersal there was an almost immediate return to our former bait site by the waiting crows.  Our net launcher had been camouflaged, how did they know the danger was gone?  Or did they?  What cues might they have been paying attention to?  I sense the questions of a Master project coming together…Our second site didn’t prove much more successful and after a long morning we headed in with our single bird.

For the next 5 days I was charged with feeding and caring for “Blue” (named after the color band we applied).  We were lucky to have caught such a robust adult, and to our relief he was not the least bit timid about eating his food or generally making a big mess.  With the wild crows there to pick up the scrapes and keep him company, Blue tamed up quick and it was a pleasure to watch move about his aviary. 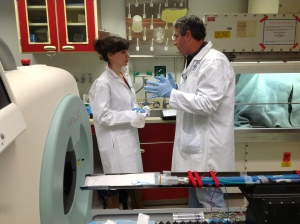 6 days after trapping him, it was time to take Blue in for scanning.  The whole procedure went incredibly smoothly, and Blue perked up quickly after taking him off anesthesia.  After 24 hours of recovery time, it was time to let Blue go.  It was a great experience, and a pleasure to share that, and the rest of our day with Virginia.  I can’t wait for her book to come out!