Hate new things? So do corvids.

“There’s not a raven alive that wouldn’t eat that,” my colleague exclaimed as we finished spreading out the tuna.  It was a beautiful carcass.  Big, glistening head, bones and guts spread out over the asphalt, perfect bait to lure the ravens we were attempting to band.  As I wiped the blood off my shoes, I could hear the beating of raven wings above my head. Surely when we returned in a few hours it would be gone. Twenty four hours later it smelled considerably worse but was otherwise unchanged.  The ravens had inspected our offering and evidently rejected it. Where had we gone wrong? 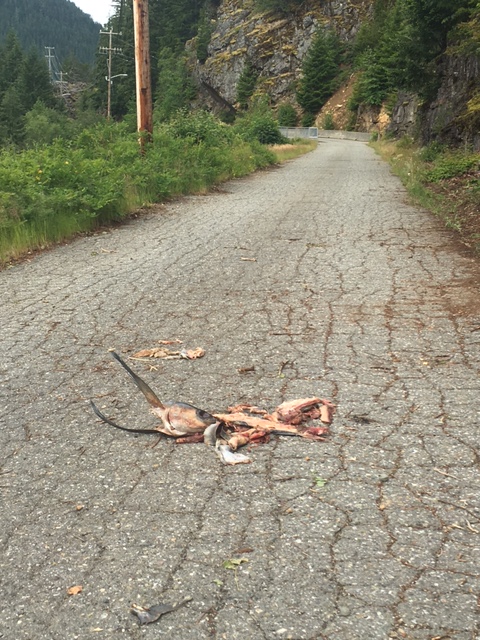 There are many possibilities, but a likely explanation is that our set-up was simply too unusual in its setting.  Perhaps if we had been working on the coast or at a dumpster, the carcass wouldn’t have seemed so out of place.  Here, however, high above a freshwater lake our bait was probably not something these birds had ever encountered.  Seeing such a strange carcass likely drove our ravens off to a more conventional and trusted source of food.

Contrast this with the behavior of an urban crow, and this level of cautiousness on behalf of our forest ravens might seem strange.  For example, watching a crow root seemingly recklessly through your garbage might give the impression that they worry little about new things.  In fact, corvids are notoriously neophobic1 (fearful of new objects) in contrast to many other bird species.  This may seem at odds with an urban corvid’s lifestyle. After all, the urban environment is constantly presenting them with new objects, many of which contain edible food.  An unnecessary fear could therefore be a costly inhibition to exploiting worthy food sources.  On the other hand, too little indiscretion could expose them to predators, poisons or other dangers.   So how do urban crows deal with this paradox and how might they compare with their rural counterparts? 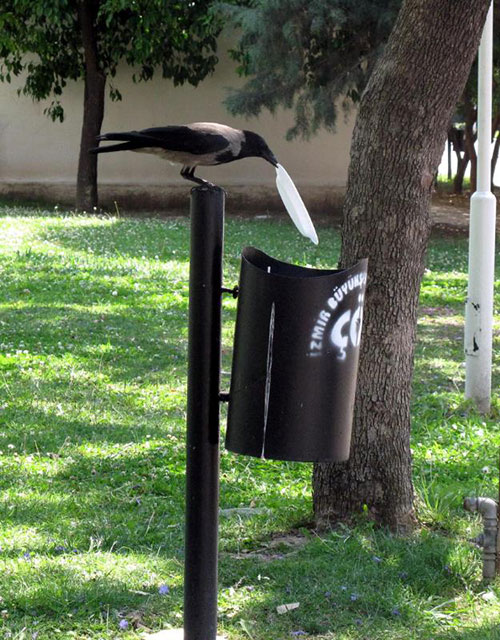 A study by Alison Greggor et al.2, recently published in Animal Behaviour set out to address this question.  To do so, they presented 5 corvid species (including jays, rooks, crows, magpies and jackdaws) and 7 urban dwelling non-corvids species (including blackbirds, finches, tits, robins, pigeons, etc.) in both urban and rural settings  with a novel object placed near a familiar food source.  The novel object was either a) natural objects, b) familiar pieces of litter or c) strange new object made to look unlike any animal or food packaging. Neophobia was measured by changes in latency to the food after the object was placed near it.

They found that, in contrast to non-corvid species, corvids were more wary to approach food near any of the three novel objects, adding support to their neophobic reputation. Interestingly, there was no difference between urban and rural corvid’s willingness to approach the completely new object (object c).  Urban crows were however, faster to approach food near familiar litter (object b) than their rural counterparts.  They interpret these findings to suggest that urban living fosters context specific, rather than generalized reductions in neophobia.  This balance may best keep corvids out of trouble with respect to entirely new things while still allowing them to exploit items that look similar to other known anthropogenic food sources.

I guess next time we’ll stick with trail mix and old sandwiches to entice our wary ravens!

4 responses to “Hate new things? So do corvids.”