“Mirror, mirror on the wall

am I the smartest of them all?”

…Is not a question crows are asking, despite what you may have heard.  Because they, like basically all the super smart birds, are really, really bad at the mirror test.

A juvenile jungle crow catches its reflection in a window. Photo: Paul Brown

This might contradict what you’ve heard elsewhere.  But the reality is that corvid after corvid fails the mirror test.  Except two European magpies.1  That’s right,  every sound bite you’ve ever heard that corvids possess self awareness (as evidenced by their excellence at the mirror test) is based on the performance of two birds. But more on that later.

In humans, self recognition in mirrors emerges reliably when we are about two years old and it marks the beginning of a developmental process that culminates in the rich consciousness that makes us human, at least abstractly.  Given a mirror’s significance to our own understanding of the self, it’s no surprise we’re so curious to see what non-humans animals do, and more curious still to see if it can show us whether they share our possession of consciousness.  In fact, putting animals in front of mirrors and looking for signs of recognition is something we’ve been doing, at least officially, since the 1970’s.   Since those initial studies on chimps, a debate has raged over the outcomes and overall efficacy of such tests.

A mirror test is generally composed of two parts.  The first is spontaneous self directed behaviors.  In other words, when an animal encounters a mirror for the first time, does it react like it’s looking at itself with behaviors like self exploration or does it freak out at this stranger suddenly standing in front of it?  What about after it has 100 hours of experience with a mirror or a 1,000?  The second test is known as the ‘mark test.’ A mark like a red or blue dot is applied to the animal without its knowledge and we watch and see if once it gets in front of the mirror it tries to remove or at least touch the mark.

With respect to both these tests, from African grey parrots to New Caledonian crows, we see consistent failure, or at best inconsistent maybe-kinda success.2,3 For the record, while there’s no published tests that have been done on American crows, I can tell you that I’ve watched reflective windows and car mirrors ruin many a breeding crow’s afternoon plans. In Mind of the Raven, Bernd Heinrich reports a mostly neophobic response among his captive birds, punctuated in some individuals with moderate curiosity.

So what of Gretie and Goldie, those two magpies that did show higher mark recognition when given a mirror than control birds?  There’s two problems. The first that they used stickers to mark the birds and it’s difficult to know whether it was really the mirror eliciting the behavior or if maybe they could just feel the stickers. This idea was championed after a study done on jackdaws found that birds without mirrors detected the stickers just as often as those with mirrors.4  If they had detected them equally zero times then it might just indicate that jackdaws are bad at the test, but the fact that they did detect them in both cases is what raises the alarm because it shows the birds were somehow sensing the stickers in the absence of the mirror.

The second problem is simply:  what can two birds, especially out of a sample size of five, really tell us about whether corvids understand their reflection in a mirror anyway?  Not much.

Maybe you’re thinking “well, perhaps they just don’t understand how mirrors work at all, so of course they don’t recognize themselves.”  This isn’t a bad idea but it doesn’t appear to be true.  In that study on New Caledonian crows for example, while the birds didn’t show any self recognition behaviors, they could use the mirror to find hidden food. This demonstrates that they can exploit the properties of a mirror, and understand that mirrors reflect objects in the real world.  We see the same in grey parrots.

So now that I’ve gone and dampened things, let’s just go ahead and soak the rest of that blanket.  Because even if corvids or other birds passed the mark test with flying colors, it wouldn’t necessarily mean they are self awarewhich is kind of the point of the whole test.  Enter pigeons.  Since the 1980’s we’ve known that pigeons excel at the mark test with a little bit of training, just like they can excel at shape discrimination or any number of other seemingly complex tasks.5  But the ability to learn isn’t in and of itself a reflection of capacity for complex thinking.  After all, it only takes 8 days to train a spider to solve a maze.6 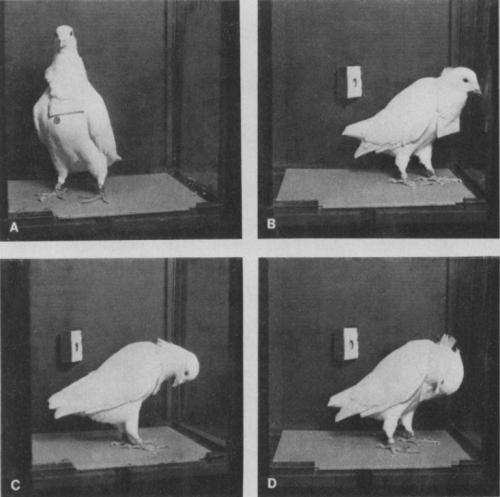 So does failing the mirror test mean corvids don’t possess theory of mind or the capacity for self awareness?  No.  Based on other studies, particularly those in ravens, it may be more likely that a mirror test, at least in it’s most common form, is just not a biologically appropriate way to ask this question.7,8  So don’t write off the capacity of a corvid to know thyself just yet.  But maybe offer a polite “ah, hem” the next time someone marvels at the narcissism of magpies.

19 responses to ““Mirror, mirror on the wall”