Can crows and ravens hybridize?

This feels like a simple enough question but answering it requires a check on how scientists define ‘species,’ a look at the phylogeny of crows and ravens (that’s the study of the evolutionary development and diversification of species i.e. the study of the tree of life), as well as an understanding of how their biology determines whether “Can they hybridize?” turns into “Do they hybridize?” 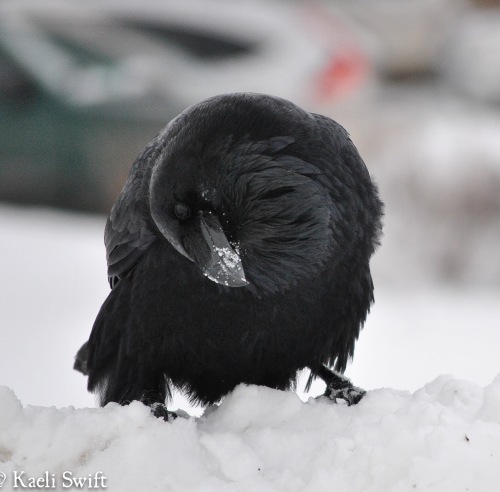 A rather curious question indeed.

For decades, the textbook standard for defining the term ‘species’ in introductory biology classes has been the biological species concept.  First coined in 1942 by ornithologist Ernst Mayr, this is the idea that a species is a population of animals that share a gene pool, and can successfully mate with each other, but not with animals outside their gene pool. Almost always, the pudding offered as proof is a mule; the sterile offspring of a breeding attempt between a horse and an ass.  “See,” your teacher would say, “The offspring are sterile because it’s the result of two different species,” and then they would slap their hands together like a satisfied chef.  But of course, nature is rarely so inclined to follow such rules.

In fact, lots of animals we consider distinct species can and do interbreed.  Possibly even more problematic is that there are plenty of living things that don’t reproduce sexually at all. So how do you define them under this concept?  These issues have left scientists jaded and unsatisfied with the biological species concept and given rise to new classification schemes that don’t consider sex.  One of the most robust rivals to the biological concept is the phylogenetic species concept, where species are defined by their evolutionary histories.  The problem with this concept though is that sometimes the amount of hair splitting that goes on divides formally unified species beyond what is perhaps biologically appropriate.  Meaning, if two species have a distinct evolutionary history, but fulfill the same ecological role, look the same, and freely interbreed, are they really distinct species? Without going too far further down this rabbit hole suffice it to say that there still remains no universally accepted scientific definition of a species, and that more than likely the most comprehensive approach is one that takes into consideration an each organism’s unique situation and leans on multiple concepts as appropriate.

This is relevant to American crows and common ravens because knowing that they are two different species might incline some people to believe that the answer to the question “Can they interbreed?” is, by definition, “No.”  However, hopefully now it’s clear that such dogmatism will only hamper our understanding of the situation.  To advance further on this question, we instead need turn our attention to the tree of life.

For animals to freely interbreed, they generally need to share a very recent relative.  Given their geographical overlap and how similar American crows and common ravens look, it might be tempting to assume they must be quite closely related, but of course by now you know what assuming will get you. As you can see from the phylogentic tree below, you need to go back four ancestors (or about 7 million years) to find the relative shared by both birds.1  American crows are actually more closely related to the collared crows of China than they are to common ravens.  So, while we haven’t ruled on our original question one way or another just yet, this suggests it shouldn’t happen extremely freely. 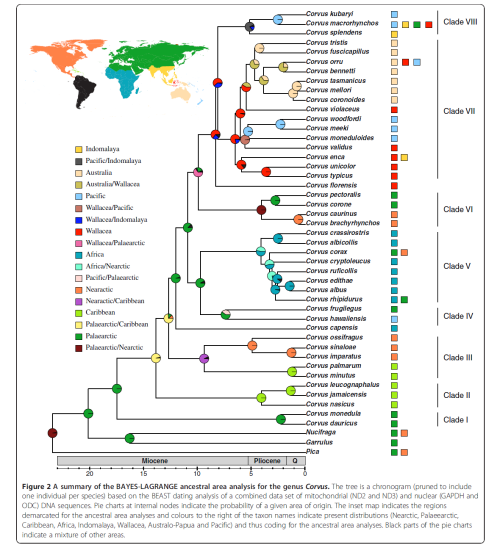 For the last piece we need to consider the real life, biological relationship between these birds.  Most crucially, we need to ask if, when in close proximity, they generally tolerate each other and socialize.

A paper out earlier this year by Freeman and Miller answers this question with a resounding, “No.”2 Thanks to thousands of observations provided by citizen scientists, the authors were able to show that most interactions between the two are aggressive, and that crows are almost always the aggressor, particularly during the reproductive period. This is thanks in no small part to the fact that ravens will depredate crow nests. Therefore, come breeding time, crows will be most anxious to evict ravens, not bed them.

A crow attempts to chase a raven out of its territory

With all this in mind, it seems we can finally conclude that the most informed answer would be, “Ravens and crows do not hybridize…

Ok time for me to come clean.  The truth is that I’ve buried the lead a little bit here, because in fact we know the answer to the question “can they hybridize.” In 1990’s Beth Jefferson documented a successful breeding attempt between a wild American crow and common raven in Toronto, Canada.3  In 1990, the single raven started showing up in the area; a surprise to the local birders since they didn’t usually encounter ravens for another 145km north.  Over the course of the next three years, the raven appeared to be buddying up to a crow in the area.  It wasn’t until 1993, however, that Beth and other locals were able to document the pair nest building, attending to nestlings, and successfully fledgling two young.

One of the hybrid young documented by Beth Jefferson

So why on earth did I drag this out so much? Because your take home message should not be that crows and ravens are going buck wild making little cravens.  Just as one swallow does not a summer make, one or two craven babies does not a habit make.  By and large, American crows and common ravens are reproductively isolated and do not hybridize.  But under the strangest of circumstances there’s no questioning that…

18 responses to “Can crows and ravens hybridize?”