If there’s one general area of questioning that overshadows all others that I receive, it’s questions about vocalizations. One caw, five caws, quiet wows, and loud clicks. We can’t help but to ask what it all means, and wonder how we might better understand and connect with crows if only we knew. To the chagrin of virtually everyone that has asked me a vocalization question, however, the answer is almost always a very disappointing shrug of ignorance. So to help you better understand what we do know about crow vocalizations and why it pales in comparison to what we don’t know, I am dedicating two posts to this topic. The first one–this one–will cover a recent study authored by my colleague and former labmate, Loma Pendergraft. Part II will take the form of a vocalization Q&A. So sit back, grab a snack, and get ready to know more, or maybe less, about crow vocalizations than you ever thought you could.

Why are you yelling at the dinner table?

If you’ve ever fed a crow  you may have noticed that shortly after whatever tasty morsel you’ve offered hits the ground, the receiving crow will give a couple caws. If you’re anything like Loma Pendergraft, your next thought will be, “Why?” Are they inviting family members to the feast? Are they trying to scare off competitors? Do the number of caws mean anything?

Unlike most crow feeders that have to settle for a disappointingly fruitless Google search for an answer, when Loma first asked this as a graduate student he was in a unique position to test it. After three years of labor, his findings have been published in a new paper entitled: Fussing over food: factors affecting the vocalizations American crows utter around food.1 As I can already feel your anticipation in finally finding out what all those food calls are about let me start with a spoiler; you are probably not going to learn what you had hoped to from this study. But you will learn something invaluable about crow communication and how we study it. So with that out of the way let’s start at the beginning.

Generally speaking, if an animal vocalizes at a food source, it must incur some benefit from that vocalization that outweighs the potential costs. Costs include things like getting your food stolen by a competitor or drawing the attention of predators. Conversely, the benefits may consist of things like being able to share resources with your mate or kin, claiming ownership, or attracting other individuals to help you secure a food source away from another bird. 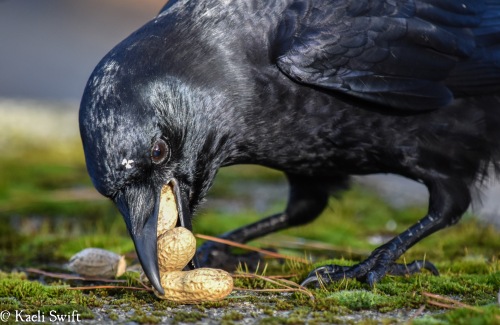 To try and determine what, if any, of these might motivate the calls that crows produce, Loma conducted three experiments. In the first, he attempted to look for patterns in their vocal behavior by categorizing and quantifying the calls given around food of varying amounts. For example, perhaps for an amount of food small enough as to be consumable by one crow they keep quiet, but for a significant amount they have a specific three-note “I found food” call to alert their mate. In Experiment 2, he ground-tested his ideas about how he was interpreting the calls from Experient 1 by doing playback. Essentially, he wanted to show that if he thought a three-note call was used to attract a mate, then by playing it back the mate should come in. Finally, in Experiment 3 he tested whether the different calls he had recorded had any effect on the listener’s ability to find the food.

To conduct these tests, Loma used wild crow pairs that he located all around Seattle. To prevent the birds from learning his face, he used a variety of sometimes hilarious disguises.  He fed each pair three different amounts of food over the course of three trials: 1 peanut, 5 peanuts or a bountiful 25 peanuts. To try and suss out both if there were any patterns in calls given around food and if calls varied with the amount of food, he recorded their behavior before and after feeding them, and then used vocal analysis software to detect patterns in call structure.

What he found was that, unlike the grand reveal we were all hoping for, few clear patterns emerged from the call data. When crows are around food, they give shorter calls than they did before, and their calls around only a single peanut are longer than when they are around a more substantial amount of food. But in all the other areas where you might expect some pattern to emerge; call rate, peak frequency, the number of syllables, etc., none did.

Still, the fact that they give short calls around food is suggestive of something, so Loma attempted to determine in Experiment 2 if these short calls are used to either attract birds in or repel them away by playing back those short calls and watching for how the birds responded. The resulting response was more of a whimper than a bang. Or maybe I should say more of a short call than a bang. Because outside of matching the short calls with their own short calls, the crows hardly changed their behavior. Even in Experiment 3 where he looked for whether specific calls aided in the listener’s ability to locate the food, he came away still puzzled. Crows were only able to locate food in 38% of cases and were no better than when played the control chickadee calls.

A cynic may walk away from these findings feeling as if nothing has been gained; that we know little more about what crows are saying around food than we did before. While it’s true we may not have learned much about what they are saying, this study did reveal something important about what they are not saying. Because while Loma found few patterns once the food was down, he did discover that crows give longer calls in the absence of food and that those medium calls prompted territorial behavior when played back. The implication is that crows do not give territorial calls around food, perhaps to avoid risking its discovery by adversaries.

In addition, while it makes for a less compelling headlines, failing to support our hypotheses offers fundamental insights and lays the groundwork for future studies to keep pressing forward. In this case, Loma and his coauthor John Marzluff question whether the difficulty of detecting clear patterns in “x” vocalization leading to “y” behavior is because crows encode so much context-specific information in their calls. In fact, a previous study on American crows found that acoustic variation can indicate the caller’s sex and identity.2 Perhaps the reason we have so much difficulty in mapping out the world of crow communication is that, unlike a crow, we fail to detect all of the information they can ascertain and use to determine how to respond.

So, yes, in some ways we are no closer to Dr. Doolittling the crows than we were before. Instead, we are left with the more compelling reality that our inky friends likely posses an incredibly rich and complex vocal system. For me, this continued mystery only serves to endear them further. After all, do any of us love these birds because we find them straightforward and predictable? I doubt it.

Want to learn more about Loma’s research or this study in particular? Don’t forget to head over to his blog.  There you can drop him a line with more crow questions or to request his new paper in full.  He did so much more than I summarized here, it’s really worth a full read!