Those blue eyes, that awkward gate, their seemingly constant precariousness, they’re all calling to you to intervene. Here are 5 reasons second guessing that instinct might be in the bird’s best interest.

1) The vast majority don’t need your help. It’s totally normal for baby crows to be on the ground and flightless as long as they’re covered with feathers and appear otherwise alert and mobile. Even nestling crows are usually on the ground on purpose. Not because they are ready, but because their parents have intentionally rejected them for one reason or another. They will die and that’s ok. Part of coexisting with wildlife is giving them the agency to be wild. The story is different of course for species where the survival of individuals may mean the difference between population survival and extinction, especially because these situation are almost always driven by human activity.

2) It’s hard to tell when they’re stressed.  Recently, I saw a video on Facebook of a Steller’s jay fledgling in the care of a very well intentioned person.  She was giving it gentle strokes with her fingertips, each touch resulting in the young bird turning its head towards its back and opening its mouth.  The comment thread filled with ooo’s and awww’s and general comments of encouragement or gratitude for her actions.  For me it was like watching an alien attempt to care for a human child, the child recoiling and screaming while its caretakers congratulated themselves on how kind they were being.  Having handled baby corvids before, I know what that kind of posturing means, it means “I’m scared and stressed.”  To an untrained eye though, it may not look much different than the kind of gaping that means ‘feed me.’  Being stressed to death is a reality for young, or even adult animals, so any handling best be done by experts whenever possible. 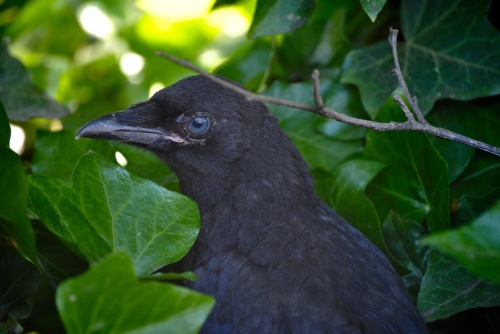 3) It’s illegal to rehab crows without a license. You can provide temporary care until you can get them to a licensed facility, but do not attempt to rehab them on your own.  Mistakes like the one I just described are a prime example of why the law seeks to protect animals by ensuring they are only raised or rehabilitated by experts.  For more information on how to handle them until you can get them to a facility visit my previous post.

4) Imprinted crows do not survive well in the wild.  Even if baby crows are receptive to being treated like a pet, doing so is both a legal violation and I would argue a violation of their right to be a wild animal with a healthy fear of people.  Of all my daydreams, at the top of the list is having a wild but imprinted crow that follows me around.  I even have a name picked out.  This fantasy of mine will forever remain just that, however, because it’s too dangerous to allow a crow to become that comfortable with people.  All it would take is one cranky neighbor with a pellet gun and it would be over.  Not to mention being imprinted on people, instead of crows, denies them access to skills and relationships with other crows that will help them survive into adulthood.

5) It may do more harm than good.  The conventional wisdom suggests “well, worse case scenario is I try and rehab this baby crow and it dies, which it would have done anyway so really, nothing’s been lost.”  The more we study death in social animals the more we are beginning to realize there may be a cost to prematurely removing ailing or dead animals from their groupmates.  Being able to interact with their dead may serve an important role for social animals, and denying them this opportunity may have serious implications in their ability to process that death.  So be thoughtful about how slim the chance of survival is.  It might be that the kindest, most responsible action is no action at all.