Corvid of the month: Rooks

In honor of last week’s #CrowOrNo photo, I wanted to spend some more time spotlighting a corvid perhaps less well known to my fellow North Americans, the rook (Corvus frugilegus). 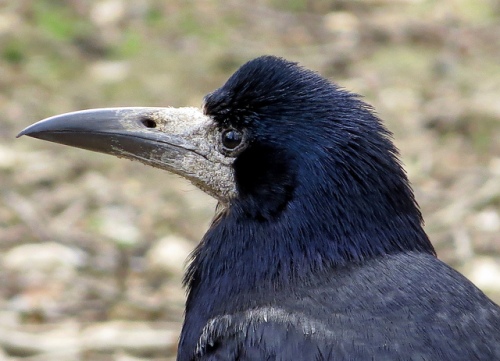 Among corvids, adult rooks might be one of the most unmistakable species. Their naked, chalk colored chin, lores, and bill base gives their face an appearance resembling no other bird.  The grey crow, or bare-faced crow (Corvus tristis), shares a similar facial pattern but is easily distinguished by its rather blushing appearance and blue eyes.  In addition, whereas the grey crow is known mainly to the peoples of Papua New Guinea, rooks have one of the widest distributions of any corvid species, breeding from Sweden all the way to China. 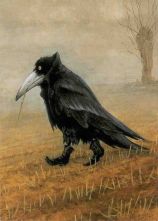 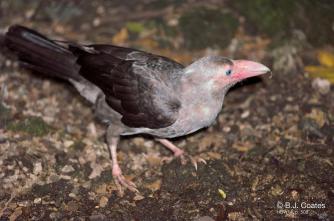 (Hover over tiled photos for captions)

Of course, what made last week’s #CrowOrNo submission such a challenge was that the photo was not of an adult, but rather a first year bird.  With their nasal hairs intact, first-year rooks look something like a crow/raven hybrid. Although bill shape is, I think, the best tell, one other field marker to look for are their notoriously shaggy “pants” (belly and leg feathers) in contrast to crows and ravens.

The transition to bare-faced adult occurs during the bird’s first complete body molt when they’re around 10-15 months old.  This process can take as little as 25 days but for most birds occurs over the course of several months1.  The evolutionary reason for this loss may have something to do with their foraging habits, which consists largely of probing for worms, though this remains unclear. 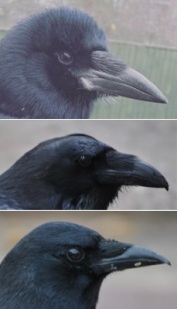 Unlike many Corvus species which are more general with respect to their diet, rooks are fairly specialized to feed on the small worms that live among the roots of plants.  One consequence of this diet is that there are distinct boom and bust seasons.  In April and November, wet conditions make worms plentiful, but in other times of years drier conditions drive worms deeper and out of reach.  Since access to food can be precarious, rooks have adopted a rather unusual incubation strategy compared to most birds.  Rather that commencing incubation when the entire clutch is laid, which promotes the same hatch date, rooks start incubating the first egg as soon as it is laid.  This chick is born earliest, giving it a clear advantage over its future siblings.  If food becomes sparse only this chick will survive. If food remains abundant, the parents can provision enough to supply the larger, more dominant chick, and its younger siblings.2

Rooks are distinct from other corvids with respect to their behavior as well.  In contrast to crows or ravens, rooks are essentially non-territorial.  During the non-breeding season they are most commonly found in large foraging groups (much to the chagrin of local agricultural farmers, I imagine).  During the breeding season they nest in colonies, rather than individual territories, though they will defend the area around their nest and their mate as necessary.  A nest is often reused by the same pair year after year until it is razed by weather, or the pair is forced for some other reason to construct a new nest.  Like many other Corvus species, they maintain a socially monogamous life-long mate.3

Cognitively, rooks demonstrate many of the same skills that have brought some of their peers into the global spotlight. For example, when in the care of humans, rooks have demonstrated an astounding alacrity for tool use, though they are not known for manufacturing tools in the wild. For example, captive rooks have been shown to bend wire into hooks to extract food out of a tube like New Caledonian crows, or work together to solve problems like chimps (though unlike chimps, they do not appear to understand when cooperation is necessary or how it works).4,5

Taken together, these snippets of their biology and behavior demonstrate what unique members rooks are to the Corvus genus.  I envy my counterparts across the Atlantic and Pacific and encourage them to take a second look at the rook whenever opportunities present themselves.

12 responses to “Corvid of the month: Rooks”