The science behind caramel crows

Generally, when I receive emails with the subject line “interesting crow” it’s because the author noted some peculiar or amusing crow behavior they want to share, or because they spotted an unusual looking crow due to AKD, leucism or avian pox.  Rarely, it’s for none of these reasons and is truly a horse of a different color. Or in this case, crow. 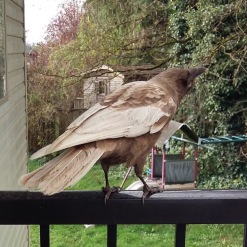 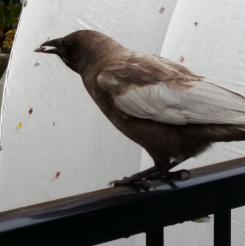 Meet Al, a hatch year American crow whose natal territory overlaps with Tara Chafe’s property. According to Tara, Al is the second bird born in the last 5 years with this kind of color abnormality. The bird that she reports is its mother is leucistic, but as you can see below, she’s not a particularly dramatic case with maybe only one or a couple more white feathers. 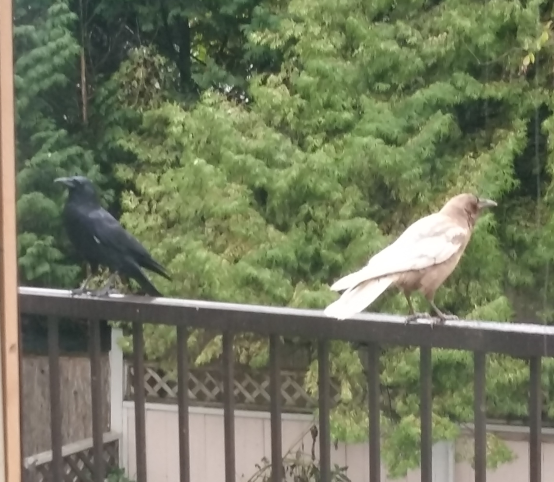 Without having observed Al myself I can’t confirm any of Tara’s observations, but from her perspective, Al appears to interact normally with the other crows, and doesn’t exhibit any other health issues. In fact, the first caramel crow that Tara encountered has gone on to mate and establish a territory in a nearby neighborhood and she still occasionally encounters it.

Understandably, Tara’s question to me was “what is going on here?” and initially, though I am by no means an expert in pigmentation, I didn’t expect it would be too much work to provide her an answer.  And with that my descent began.

It’s helpful to start by understanding what controls pigmentation in birds.  There are three different groups at play: melanins, carotenoids, and porphyrines.1  Melanin is probably the most familiar term, after all we possess a lot of it ourselves and the skin cancer melanoma is named for the melanin producing cells where it occurs.  In fact, there are three kinds of melanin: eumelanin, which controls dark browns and blacks, pheomelanin, which controls reddish hues, and neuromelanin which occurs only in the brain.  Carotenoids, on the other hand, are derived from plants and produce the red of a cardinal or the yellow of an American goldfinch.  Porphyrines, which are modified amino acids, can produce a wide variety of colors from pink to green, as observed in some of the more colorful corvids such as the Bornean green magpie and ceylon magpie.  Lastly, the structure of the feather also plays a role in color, particularly with respect to the color blue and iridescence, but I’ll save that for another post.  Of most concern to us in this case is melanin, since that’s what’s controlling coloration in American crows. 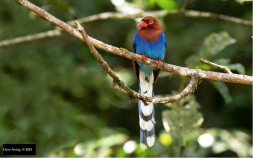 Knowing this is an issue of melanin, I next wanted to identify how we might characterize this color aberration.  Older birders will describe this bird as leucistic, and historically that convention was considered accurate.  Contemporary semantics among pigmentation papers, however, have clarified leucism as a condition that “results from a complete lack of melanin from all or parts of the plumage”.2,3 In other words, crows that are leucistic would be completely white in one or more feathers, which this crow is clearly not.  Without yet knowing exactly what’s going on here the more appropriate terms might be: “Schizochroism” meaning a lack of a single pigment, or “dilution” meaning an overall decrease in pigmention deposition.2 A color mutation known as “brown,” meaning a qualitative reduction of melanin, has also been proposed.3

A leucistic crow in flight

Fellow crow expert, Dr. Jennifer Campbell-Smith, sees there being a few possible explanations.  The first is simply that we haven’t studied pigmentation across Corvus species thoroughly enough to say that crows such as American crows don’t produce pheomelanin.  After all, some Corvus species, such as the brown necked raven, certainly appear to express pheomelanin produced colors.  Perhaps American crows do produce a modest amount that has so far been difficult to detect, but is revealed in cases like this.  Alternatively, Jennifer suggests that even if American crows don’t typically produce pheomelanin they may still possess all the infrastructure for doing so. Perhaps in cases such as Al’s, the genes that regulate such production have been turned on. As an especially interesting side note, pheomelanin is a particularly energy intensive pigment to produce, and as such, there’s evidence of a correlation between larger brain sizes (including Corvus species) and low to undetectable levels of pheomelanin6. 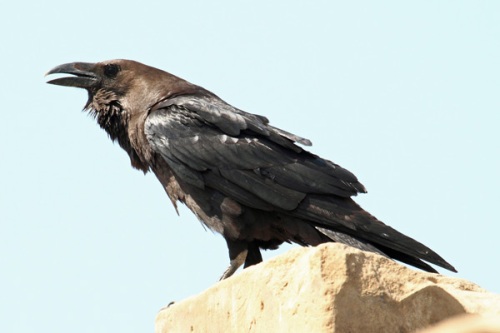 Another publication suggested that cases like Al’s are caused by incomplete oxidation of eumelanin3, but I am dubious of this paper because they claimed that corvids as a family do not produce pheomelanin, which blatantly untrue at worst or, if they meant Corvus, an egregious typo at best.

Ultimately, what I found was that rather than being a matter of a quick trip to the virtual library, an explanation for Al’s condition is currently unresolved by science.  Which is probably my favorite genera of science.  After all, what’s better as a scientist than embarking on the unknown or poorly understood?

Many thanks to Tara for a truly interesting crow, and for agreeing to let me share Al’s story here.

23 responses to “The science behind caramel crows”