The adorable guide to distinguishing American crows and common ravens

Recently, I published what I hope is one of the most comprehensive crow vs. ravens guides readily available on the web. But sometimes, you don’t want to pour through a bunch of text and details, you want just a quick reference, or a shorthand way of explaining to an inquiring newbie that crows and ravens are actually different.  To that aim, I am so excited to share that I teamed up with artist Rosemary Mosco of Bird and Moon comics to create a guide that is equal parts charming and informative.  Share it widely and spread the corvid love! 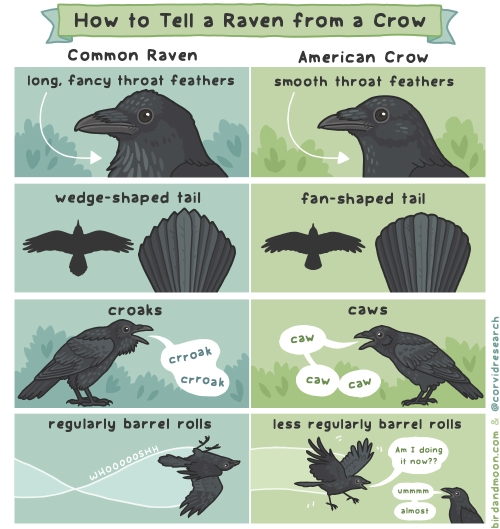 UPDATE
Since initially sharing our comic Rosemary and I have been absolutely delighted at its reception, including the number of education programs asking to use it.  Among those is the Kituwah Preservation and Education Program, whose mission is to preserve and promote the Cherokee langue through engagement and service.  Cherokee is a beautiful, complex language that like all other indigenous American languages is endangered of dying out due to the cultural genocide that the US government inflicted on indigenous Americans during the late 19th and early 20th century.  I am incredibly honored to contribute to KPEP’s mission even in this small way.  Please feel free to share this image widely, just make sure to attribute the design to Rosemary Mosco, and the translation to the Kituwah Preservation and Education Program. 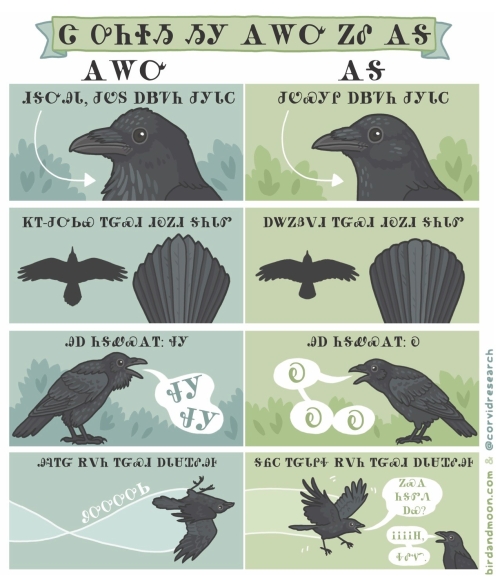