Crows are watching your language, literally

That crows can recognize humans faces (and other physical attributes) has been a staple of our experiences with them for thousands of years.  It’s part of what has allowed them to take such a prominent place within our cultures, and it’s what keeps us refilling our pockets with peanuts or kibble, anxious for the chance to be recognized, to be seen by a wild animal. If, like me, you’ve been committed to such a relationship, you probably found yourself wondering about what it is they’re saying all the time. Although we still have more questions than answers, it’s not for lack of trying; in fact parsing crow “language” is still a hot topic in corvidology.  But for all our efforts to understand what crows are so often going on about, have you ever thought much about what they make of what we’re saying? 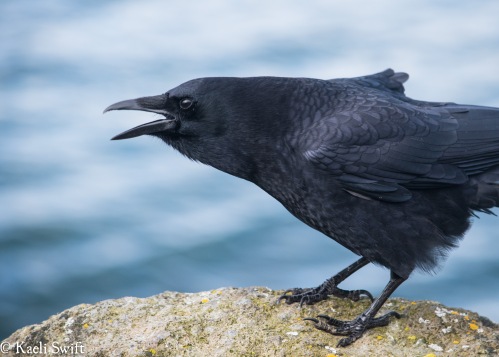 Ask any crow feeder about their ritual and there’s a good chance that it starts with more than just making themselves visible. To get “their” bird’s attention, about half of crow feeders start with some kind of auditory cue, like a whistle or gentle name calling.¹ Given that American crows (Corvus brachyrhynchos) can be individually distinguished by their calls, and many corvids—including the large-billed crows (Corvus macrorhynchos)—can recognize familiar conspecific* calls, this strategy seems far from superstitious.2,3 In fact, previous work has demonstrated that crows can discriminate human voices.

When presented with playback of their caretakers or unfamiliar speakers saying, “hey,”  hand-reared carrions crows (Corvus corone) showed significantly more responsiveness towards unfamiliar speakers.4 That their response is different is what suggests that they can discriminate, but it’s hard to not do a double take at the fact that the thing they seem more interested in is the person they don’t know.  Shouldn’t they be more interested in the folks that generally come bearing gifts? While we still don’t have a super satisfying answer to this question, it’s possible this comes from the fact that novel humans are less predictable, and therefore more threatening, than a familiar caretaker who can be safely ignored. Likewise, a new study out suggests that it’s not just individual people crows can hear the difference between, but entire languages.

In a newly released study conducted by Schalz and Izawa (2020), eight wild large-billed crows were captured in major cities around Japan and subsequently housed in aviaries at Keio University where they were cared for by fluent Japanese speakers.5  Given both their life histories and their time in the aviary, it’s safe to assume these birds had listened to a tremendous amount of Japanese throughout their lives. So, it stands to reason they might be able to actually recognize this language as familiar, but to date no one had looked at crows’ ability to discriminate between languages.  To test this question the researchers used playback to present recordings from multiple unfamiliar Dutch or Japanese speakers.  As with the carrion crow study, when these crows were presented with playback of a more familiar acoustic style—in this case a Japanese speaker—they didn’t show a strong reaction. Play them what was likely a completely unfamiliar language—Dutch—and the crows were rapt. Or at least they acted more vigilant and positioned themselves closer to the speaker. In other words, large-billed crows were able to discriminate between human languages without any prior training! 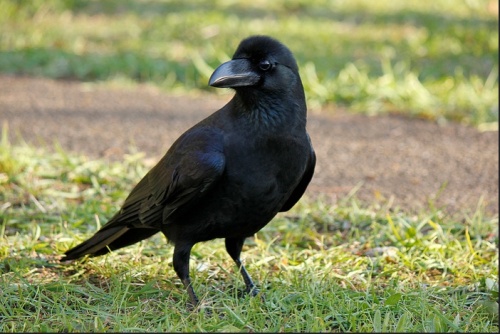 The next most obvious question is, well, why? What purpose would it serve to discriminate between different languages among unfamiliar speakers? One possibility is that it’s just an artifact of the auditory perceptual skills they need to successfully be a crow.  As I mentioned earlier, there’s a lot of information encoded in their calls, including individual identity, so being attentive to rhythmic classes may be important.  Another reason that’s worth pursuing, though, is that it may help tip them off to tourists, who may be more inclined to share or easier to take advantage of, than locals.  Fortunately the lead author on this study, Sabrina Schalz, will be starting her PhD on this topic in the coming fall. You can find her on twitter at @Sabrinaschalz, where she’s promised to keep us abreast of her future discoveries.

So the next time you’re hanging out in Japan, don’t forget to literally watch your language around the local crows. And to be safe, I wouldn’t divulge any secrets to them either.  They’re not called large-billed crows for nothing.

*conspecific=member of the same species

28 responses to “Crows are watching your language, literally”