The birds and the bees

It’s springtime in Seattle which means the air is marked with the scent of warm, wet earth, the cherry trees are in full bloom, and our conversations of the goings on in the natural world are couched in the phrase “the birds and the bees”.  While its origin story is not completely clear, it’s very likely that this euphemism has been around for hundreds of years, dating back as early as 1644 in the Evelyn Diaries.  Despite the phrases’ ubiquity for discussing human sexuality, ironically very few people know much about the sex lives of the phrase’s subjects.  This is attributable largely to the fact that how these animals procreate is quite different from the mammalian systems we are familiar with.  So in the spirit of springtime let’s talk about the birds and the bees, the real story of the birds and the bees.

Birds
The most consequential departure by birds from mammalian systems is that most birds lack any kind of external sex organ. In contrast, most other kinds of animals have sex organs that are either maintained outside the body permanently, or can emerge temporarily as needed. Among birds, there are exceptions to this but fair warning you’ll probably never look at a duck in the same lighthearted way again if you pursue this line of knowledge. Which is to say of course that you absolutely should.

As far as crows and other songbirds are concerned though, sex must be conducted without penetration by a sex organ. So instead, these birds copulate by way of the “cloacal kiss”.  The cloaca is a bird’s single external vent and it’s used for both waste elimination and reproductive activities. During the breeding season, both the male and female’s vents swell.  To copulate, the male mounts the female and pushes her tail aside with his.  Once they make cloacal contact, the sperm that’s been stored in his cloaca is transferred.  It’s an awkward looking balancing act that lasts only a few seconds.  After the initial copulatory event the pair may mate again several times within minutes or over the course of weeks.

Whereas people need to consider timing, birds can successfully mate even in the absence of ovulation.  That’s because females have specialized sperm storage tubes inside their oviducts.  A female’s vagina is very picky, however, and only a very small number of the male’s sperm will reach this holding chamber.  Depending on the species, once there a female can store the living sperm for weeks or months. The exact mechanism of how the sperm are subsequently released is not entirely known, but possibilities include that it’s the mechanical pressure of the passing ovum (unfertilized eggs) that releases the sperm, or that it’s directed by hormonal changes during ovulation.1

One additional consequence of sperm storage is that it allows for different eggs within the same clutch to be sired by unique males.  In crows for example, about 80% of a nest has been sired by the female’s permanent partner.  It is unclear how many of these extra pair copulations are either solicited by or forced on the female.

Bees
While mid-air copulations have never been confirmed in birds, honey bees do in fact mate on the wing during what’s called the mating flight.  A newly minted, week old queen will take to their air followed by thousands of male drones.  She will only mate with about 10-20 of these individuals though.  To mate, the male inserts his endophallus (bee penis) into the queen’s sting chamber.  Once he has deposited his sperm, the male detaches.  Unfortunately for the male, however, he doesn’t do so with all the parts he arrived with.  His endophallus will rip off and remain inside the female, most often killing him.  As if that wasn’t brutal enough, the next male is required to remove the previous suitor’s leftovers before being granted the ability to seal his own fate.

By the end of the mating flight, the queen will be carrying hundreds of millions of sperm, most of which will be used immediately to begin fertilizing her eggs.  Like birds, the queen has a specialized storage chamber called a spermathecal where she keeps the unused sperm.  The stored sperm from her mating flight will last up to 4 years, after which the queen’s reign will come to an end, and the cycle begins anew.

Everything you want to know about crow nests

Spring marks one of my favorite times of year.  Cherry blossoms abound, the rain smell sweet and the birds get busy putting their carpentry skills to good use. Starting early March, the silhouettes of crows with bill loads of timber or wads of soft material dot the skies as they shuttle back and forth to their nest tree. Like a townhouse development, these construction projects are over in the blink of an eye and soon, their bill loads of twigs will be replaced by food for their mate and, eventually, their insatiable young. Spotting these nests is both a great way to observe and engage with your local crow family and avoid unpleasant conflicts with protective crow parents.  With a little knowledge and a bit of practice, tracking down your resident crow nest will become one of your favorite spring traditions in no time.

Nest construction begins in early March and will continue (as nests fail) through about June. It takes 1-2 weeks to finish a nest after which the female will lay a clutch of 2-6 eggs. Unlike similarly sized squirrel nests (aka: dreys) which are made of leaves, crow nests are made mostly of pencil-width twigs. A new nest is usually about 1.5 ft across and 8-10 in deep.  After the bulk of construction is complete, they’ll line the cup of the nest with soft materials like grass, tree bark, moss, flowers, paper or fur. Once we saw a crow ripping out the hair of an outdoor mannequin, no doubt to use as lining material.

A crow gathers moss off the branches of a big leaf maple to use as lining material. 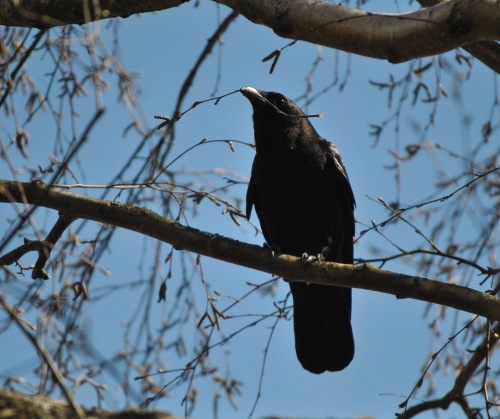 This bird toyed with this branch for a few minutes before rejecting it and letting it fall to the ground.

A sidewalk littered with twigs is good evidence that the nearby deciduous tree is a favorite among the local crows to pull branches from.  I’ve only once seen a crow try and retrieve a branch it dropped, so these are all rejects.

Crows will nest in an astounding array of places, from the eaves of skyscrapers to the crooks of well concealed tree limbs. They can tower in the sky or be almost within reach. Most commonly, I see them built close to the trunk in the top third of Doug fir trees, but this is, of course, specific to the PNW.  Both partners participate in nest construction. Helpers will aid to some degree but most of the work is left to the parents.

Not sure how they did it, but this pair managed to build a nest on the underside of the Alaska Way Viaduct in downtown Seattle 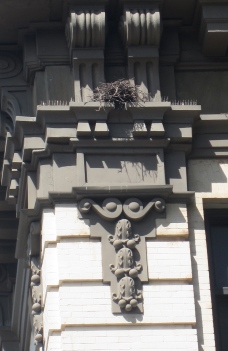 This is one of my favorite nesting locations I’ve discovered so far. Rather than being deterred by the bird spikes, they’ve essentially used it as rebar!

Crow, jay and raven nests are similar in shape and material but differ in overall size in accordance with the size of the bird. The main standout are magpies,  which build incredible domed-shaped nests the size of a large beach ball.  The nests require so much material, they can take as much as 40 days to build.  Japanese jungle crows are another species of note, as they have a (relatively) new and problematic habit of building nests out of wire hangers and causing massive blackouts.

The magpie’s nest is the big clump in the middle of the tree.

The life of a typical nest is only about 9 weeks (1-2 weeks of building, 6 days of laying, 20 days of incubating and 4 weeks of nestlings) though they are hardy structures and can remain intact in a tree for years.  After the young fledge, the crows will not return to the nest.  Crows will only use a nest once, and generally only fledge one brood a year. They will, however, build on top of an old nest particularly in areas where nest trees are especially sparse like downtown Seattle. This also appears to be more common in the Midwest.

Most breeding related dive bombs occur as the result of a person being too close to a fledgling, but some crows get feisty around their nest too. Crows in areas where they are less persecuted (like cities) tend to be more aggressive than their rural counterparts. If you know where a nest is and can avoid it, do so and save everyone the aggravation. Otherwise carry an umbrella or paint eyes on the back of a hat. Crows rarely attack from the front so having eyes on the back of your head can be an effective deterrent!

Putting all this together to actually find nests, is one of the most rewarding moments an urban naturalist or crow enthusiast can have.  Be warned though: crows are wary of potential predators (including people) spying on them and they have a few tricks for throwing you off, so don’t be surprised if a nest location you were certain of turns out to have been a ruse!

Can you spot the nest?

Have more questions? Let me know in the comments! 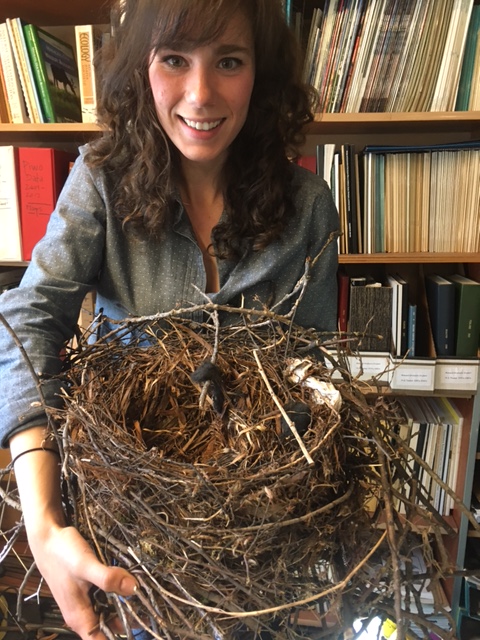